Fabrication of a laminated tiller

My NIS 26 PRESTO was fitted with a kick-up rudder which most times worked very well. However there have been occasions when running in shallow water the rudder strikes bottom and kicks up, which it should do, however when under full sail steering becomes a mammoth task. Instead of a vertical blade a meter or so down you now have a horizontal blade a meter or so out the back. Not good. I once sailed for an hour with a novice on the tiller, he kept quietly saying “gee this is hard work” and me I was just enjoying the day out, until we were about to ram another yacht, “steer away” I quietly commanded in my best squeaky voice “I am trying but it won’t go” only then did I discover the board had kicked up. Poor bloke had been steering all this time with the board out the back, needless to say he hasn’t asked to go out again.

So the time came to change the rudder design and thanks to NIS. Boats Robert Ayliffe a new vertical drop rudder and box arrived and fitted perfectly to the existing pinions.

Taking all these constraints into consideration it became obvious that a curved tiller is the only way to go.

As the tiller starts off at the box end at 85mm across and the connection plates to the rudder box are 40mm deep to steam bend a piece of timber of around 90 mm by 50mm in tight curve didn’t strike me as being easy. So laminating was the only practical solution. What timber to use? Well I have a nice stack of very dry furniture grade New Guinea Rosewood, no question on what to use. Unfortunately New Guinea Rosewood is quite a brittle timber and I have found it tends to snap when bent dry, being well seasoned. The only way to get good curves without damage is to reduce thickness to less than 6mm and in this case down to 5mm. Ok we have the timber, we know what is needed, how do we progress? What follow are the major steps I used to build the new tiller. 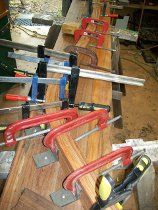 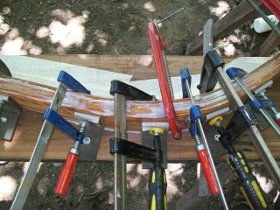 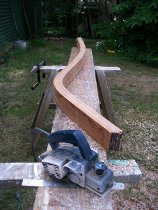 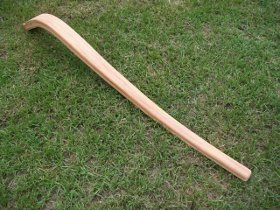 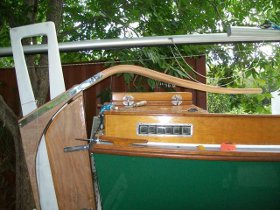