Having sailed my 14 ft Harrier single-handed and found myself restricted by the constant need to attend the helm, I decided that I wanted a device to stiffen the movement of the tiller such that the tiller could be left unattended but steady. My experience of dinghies with lashed helms persuaded me that the device would have to be readily adjustable.

Fairlead 1 is well forward on the tiller to minimise the potential load in the system. The eyes for hooks 2 & 3 are secured to the boat in or near the plane of fairlead l’s path to nullify or reduce unwanted vertical stress in the tiller. Further, the eyes are as far apart as possible and a little aft of the centred position of fairlead 1, so as to reduce change of tension with change of tiller position. For the same reason the elastic strap is as long as possible, and since at full stretch the strap and hook 1 will be limited by the two fairleads, fairlead 2 should be as far aft as possible. 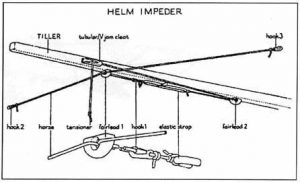 Equipping the Harrier presented no special problems. The helm is light and the generous beam permits a good separation of the eye positions. In actual fact I do not use eyes, being able to hook the horse directly onto the gunwale using modified plastic boat hooks. The horse is 3mm braided terylene, a bight of which just passes through a small nylon fairlead which in turn only just fits transversely under my narrow tiller, as fairlead 1. The tensioner is also 3mm terylene, attached via a strap of 6mm elastic to a small nylon hook; a ring would have been stronger, but would not have allowed easy removal of the cordage from the tiller.

With a heavier helm to contend with one could either increase the tension-capability of the whole system, or improve the effectiveness of the frictional parts so that greater loads on the horse could be accepted by the same tension in the tensioner.

Hooks 2 & 3 clip on to eyes positioned as far apart as practicable, at the same level as and a little aft of fairlead 1. Although the ends of the horse are fixed the middle is free to move over hook 1 and both sides of fairlead 1 as the tiller moves across. The degree of freedom of movement of the middle of the horse is varied by adjusting the tensioner. Increasing the tension in the system increases the friction at fairlead 1 and hook 1. In this manner the stiffness of the tiller can be adjusted from free to virtually locked.

Peter Bick Comments – After a few years of using just a plain piece of shock cord on my Roamer I changed to this system and wished I had done so earlier. I have found that it is best to err on the strong side when choosing the elastic strop as you can always slacken it using the tensioner, but maximum tension available depends on the material of the strop.