I was interested to read Martin’s Kortlucke’s note a while back on “American Sailing Craft” (1936).  It helped to explain to me the wide interest in Australia in wooden boats from that part of the world.  My own inspiration comes from the Brits and the rise of the British Victorian gentleman’s indulgence in yacht racing.  My great grandparents emigrated from England bringing with them a copy of Dixon Kemp’s sailing manual printed in 1880 – the year my grandfather was born.  My grandmother and her brothers were involved in yachting out of Bulimba at the turn of the century – not the last turn, the one before. 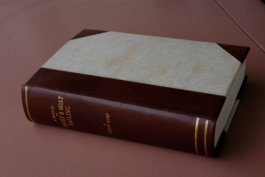 Dixon Kemp (1839-1899) was an English naval architect and an authority on sailing and yacht stability.  He was also sailing editor of “The Field” magazine – a country magazine with a strong leaning to outdoor sports.  It is one of the world’s longest-running magazines.  Kemp was a founder and the first Secretary of the Yacht Racing Association (now Royal) and became a founder and member of the board of the Yacht Registration Society in 1877.  Ten years later he wrote a review “50 Years of Yacht Building” for the Institute of Naval Architects and subsequently wrote and regularly updated several books on yacht design, yacht architecture and practical boat building, as well as the Manual.  The latter saw seven revisions in his lifetime and a further 25 to this day.  You can buy updated facsimile and digitized versions on Amazon. com – even hardback and paperback editions. 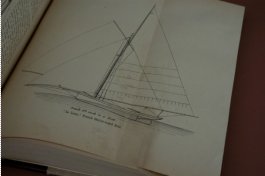 Kemp designed a number of famous yachts of the day and was very influential in introducing improvements to yacht measurement rules and in the (eventual) establishment of the Lloyds Classification of Yachts in 1906.  His books show among other interesting trends, the rise of eighteen footer sin the 19th century – the trailing edge of technology perhaps? Another context of the book is the contemporary raging competition over the America’s Cup, which had been interrupted by the American Civil War. My heirloom copy of the 1880 Manual has been carted from one end of Australia to the other.  In Canberra almost 40 years ago, I gave it
(temporarily) to the TAFE college bookbinding school.  It was used to teach book conservation and restoration and each of the 600 odd pages was carefully chemically treated, minor damage was repaired, some pages and brittle tears coated in conservator’s film and the book beautifully re-bound in leather and linen.  I paid for the materials; TAFE provided the expertise and slave labour.  The National Library was not too excited by the book as it was “only a second edition”;  nor were State Library staff, because the book has been restored rather than conserved.  I have yet to track down a copy of the first edition but three other copies of my “New and Enlarged” edition are still alive. The book provides an interesting and quaintly readable insight into early wooden yachts, boats for rowing and sailing, sailing canoes and ice yachting.  It has a magnificent “Dictionary of General Information” and 14 delightful pages of advertisements.  Explanations of the really technical and theoretical stuff are clear and have a curious historical flavour.  There is great detail in Kemp’s advice on seamanship and yacht equipment and interesting discussions on racing.  Information on scantlings, dimensions, tables of offsets and drawings and lines for many types of boats of the day, seems sufficient to build from.  In discussion of centre-board boats, credit is given to several American boats for early developments that astonished the Brits by their performance when first shipped to England. Credit for invention of the centre-board is, however, given to a British naval captain in about 1774 although it did not storm the yachting scene until about 1853.  One wonders what the good Duke of Northumberland, who apparently commissioned the first known centre-board yacht, would think of today’s yachts. Kemp’s book was translated into at least five languages but boat dimensions are Imperial, as one would expect.  If you’d like to read this rather fabulous book, amazon. com will probably provide your cheapest and easiest access to your own copy.  A 4th edition in weary condition was recently sold in South Africa for more than I could hope to get for my beloved Hartley!  There is a revision of Kemp’s 1895 9th edition, by John Leather (1988), in the Queensland State Reference Library.  My book simply has family historical and antique value but Leather’s revision is a really good read due his commentary from a modern perspective and the even broader scope of the 9th edition; and you won’t have to don white acid-free cotton gloves to read it!