There is another simple string device that deserves publicising – Roger’s Reefing Refinement. There are those who are dedicated to rolling the sail round the boom to reduce it’s size and spoil its shape. It may be acceptable on the club slipway for a day sail, but not at sea single-handed.

The alternative is what is variously known as points, slab or jiffy reefing. The principle must be familiar to all – pull down and hook, clip or tie a cringle some way up the luff of the mainsail to the forward end of the boom, and pull a line threaded through a similar cringle on the leach of the sail, and part of the foot of the sail is taken out of use.

The Roger Barnes system requires two reefs of equal depth (a desirable quality anyway) and is simple to fit as Roger has already worked out the geometry of it. The main disadvantage of conventional line reefing is that the line for the second reef hangs slack when the first is hauled down, so one is tempted to remove it altogether until needed, at which point it becomes very difficult to reeve; so, instead of the second line starting at an eye of its own, it starts attached to the first line (by knot, splice or seizing).

The revelation comes when the first reef is pulled down – the rest of the gear remains neat and instantly available for the next reef to be pulled down in its turn. With this arrangement one can reef and unreef in a seaway with complete confidence and ease, thus avoiding the all too prevalent inclination to hang on to too much sail in the hope of getting to shelter and saving yourself the struggle of practically unrigging the boat to reduce sail.

The only other fitting that is recommended is a topping lift to keep the boom where vou want it while you ease the halyard. And, if you have a gaff or gunter rig, make it a double topping lift while you are at it, it makes life aboard a dinghy much more comfortable. 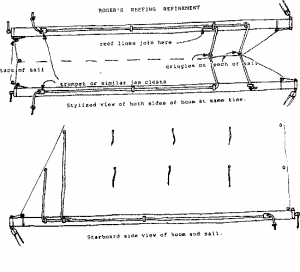