How Much Bouyancy is Enough

HOW MUCH BOYANCY IS ENOUGH?

This is the (only) Golden Bay 11 (normally they are 12 ft but this one was shrunk to fit davits)… she sails and rows and motors well even with up to 5 adults on board. A good all round tender dingy but with buoyancy confined to forepeak and rear thwart.

One day, solo, with a bit much breeze it capsized while trying to run square. She floated low in the water and proved impossible to bail out and/or re-enter. So something had to be done.

With respect to how much buoyancy is enough, the plan was to have about 80-90kg of buoyancy in each side tank (including the part of the existing seat tanks in bow and stern-that could be considered an extension of the side tank). The boat weighed a little under 60 kg before, and the estimate was it would add 5-10kg with the new tanks.

How did it turn out?

Looks like the side tanks are just right. The port tank is just above the capsized waterline. A minimum of water spills over the tank and enters the foot well. The water that comes up with it is confined to the middle of the boat and actually acts as ballast and so adds to stability, making it easier to get in. 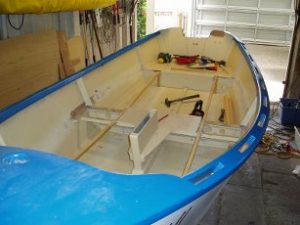 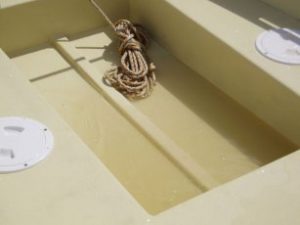