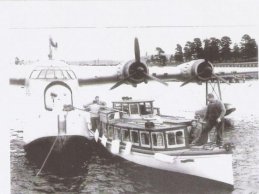 On June 30 this year a handsome 35 ft fantail motor launch named “Nancy” slipped into the Noosa River, just 95 years after she was first launched at Hobart. 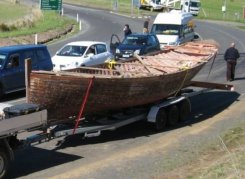 In the intervening time Nancy had served as a Derwent River ferry around Hobart, as a tender to the Short Sunderland flying boats when they provided the only air service between Sydney and Hobart, and later as a private pleasure launch. But by 2007 Nancy had become neglected, and had been taken ashore with intentions of restoration – until the money ran out. She was even threatened with becoming a bonfire if she was not removed.

Happily, WBAQ member Martin Krynen came to the rescue, and towed Nancy 3000 km to his factory at Noosaville where he and wife Judy have spent five years bringing Nancy back to better than her original splendour. 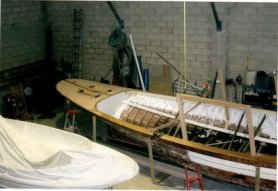 Fortunately Nancy’s hull is Huon Pine so it required only limited replacement of planks damaged by fastenings, and to stabilise it further Martin has fully splined and glued all the planking and laminated it with Dynel set in Bote-Cote epoxy below the waterline. The original decks and cabin, much modified during the years, had long disappeared. Relying only on old photographs and a sketched outline of the boat, Martin and Judy have designed and built a new cabin to duplicate the original configuration, and have laid planked decks of Celery Top Pine over plywood throughout the boat. The veracity of their restoration can be seen by comparing the photos of Nancy with that from her original launching. A major challenge has been Nancy’s engine. Martin wanted to fit an 8HP Frisco Standard petrol engine as had been installed originally in 1917, to replace the steam engine which had been proposed during the earlier attempted restoration – but Frisco Standards ceased being manufactured around 1950. By great luck, the Australian National Maritime Museum happened to have one, and they were prepared to exchange it for Martin’s steam engine and boiler. However it turned out to have a cracked and broken water jacket from salt water corrosion, so, undaunted, Martin managed to locate another head, rebuilt it and had it machined to match the original. Nancy is now the proud owner of a fully working Frisco Standard engine – a 600 kg single cylinder monster with 61/4 inch bore x 67/8 stroke delivering all of 8 HP.

Now some Krynen cunning also came into play. As an 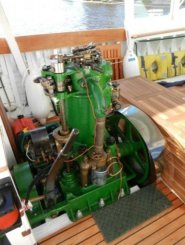 auxiliary engine Martin has fitted an electric motor, a 5HP 48V job which drives direct to the propeller shaft via triple belts at a 6:1 reduction. So this also acts as a starter motor for the Frisco and, when running on petrol power, recharges the 4 x 250 amp-hour batteries used to drive it (which also act as ballast). Under electric power a speed of 5-6 knots for 4 hours can be achieved, while 7-8 knots is a steady speed for the Frisco. So after 5 years and a huge amount of work, Nancy is now in better condition than she would have been at any time previously. At 95 years young and ready for another 95, she can be seen out on the Noosa River or moored at Martin’s jetty. 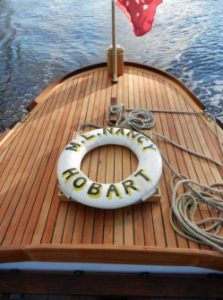