There were 5 participants in this year’s cruise from Carlo Point heading north up the Great Sandy Strait: Rick Sutton with his John Welsford Navigator, Rick O’ Donnell with his Iain Oughtred Fulmar, Jim Inglis with his own design boat , Dave Micklethwaite with his Austral 20 trailer sailer (sigh, plastic!) and Tony Deane with his Laurent Giles Jolly Boat.

Four of the participants set off from Carlo Point about 1100 on the Monday morning to sail north and camp that night in Pelican Bay. Sadly Tony arrived at Carlo Point  just after the others had left and sailed past Pelican Bay finding a campsite for the night in a creek on the mainland side of the Strait.

Tuesday morning we had to wait for the tide before we could set out by which time Tony had decided to head back to the ramp at Carlo Point. He had a hard sail into increasing southerly winds and the outgoing tide. As we were leaving Pelican Bay Jim sailed back towards Carlo Point  looking for Tony but this was unsuccessful. The southerly wind was increasing as the rest of us headed north for Garry’s Anchorage. Rick O landed on a sandbank to drop his mainsail and eventually the four of us sailed north on a wonderful run up the strait with a 25 knot wind. 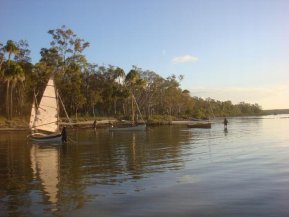 Garry’s anchorage is a great spot. We beached the boats on sand and spent the evening working out how we would get back to Carlo Point if the strong southerly wind continued to blow. Wednesday morning we had to head south against a weakening southerly and, in the morning, the incoming tide. We were making for Tinnanbar on the mainland side of the Strait. This plan went well apart from a short spell in the middle when the southerly wind kicked up to around 20 knots before swinging around to the southeast giving us a good long reach across to Tinnanbar.

The 3 boats above got away about 45 minutes before Dave who was still aground. The beach is very flat at Tinnanbar so the water is shallow a long way out, hundreds of metres out in fact. The sail back down to Pelican Bay was pleasant with 10 to 15 knots of south easterly wind. The leaders chose to camp for the night on a beach just behind the ferry landing at Inskip Point. Dave found the water there too shallow (he would have been stuck there until midday on Friday waiting for the tide) so he headed for the anchorage at Bullock Point where he spent a quiet evening.

On the Friday morning the 3 boats at Inskip Point made an early start after setting alarm clocks and moving boats as the tide fell. Dave made a late start after a leisurely breakfast. We sailed back down to Carlo Point on a rising tide with 5 to 10 knots of breeze with a bit of north in it making for a pleasant sail to end the cruise. It was sad that we didn’t hook up with Tony but as he said “he had a bloody good sail anyway”. That probably sums up the trip for  us all.