The Regatta started in the traditional way on Friday evening with a meet’n’greet cruising up Tweed on the “MV Golden Swan”. There were 27 “official” entries for the Regatta plus a few “tag-alongs” and a couple of non-starters It was a 9 am start up the River on Saturday for most with a few stragglers slow off the mark. There was a good mix of boats including putt-putts, motor launches, sailing boats and outboard propelled jobs. The weather was fantastic with clear skies and a light breeze.

Several years ago we were able to navigate with great caution, the passage behind Stott’s Island. Even then, it was difficult and slow to manoeuvre around fallen logs. Over the years it got worse to the point where navigation was impossible and this was a great pity as, even with the obstructions, it was a very pretty trip past the dense rainforest on Stott’s Island. 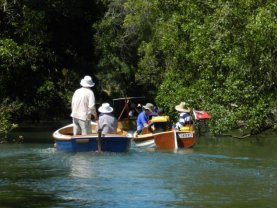 However, this year the Regatta Committee cut through the red-tape to get permission to clear the passage. Having dealt with Council and various government departments they then set-about clearing the passage with chainsaws. Some massive tree limbs were removed and these also had to be taken onto land for disposal. To the credit of the Committee, the passage behind Stott’s is now a navigable waterway with only one caution-point.  So we did the “African Queen” thing through the passage line-of-file and some boats also did the return journey.

By 10:30 am we were at the town of Tumbulgum for a morning tea break after which we headed a bit further upriver to a park near Condong where the Committee had organized mooring posts, a jazz band and for the Air Sea Rescue to put on a sausage sizzle. There was a fair crowd of the public to inspect the boats and then it was a leisurely cruise back to the Caravan Park.

At night we enjoyed a catered roast dinner and the plaques and awards were given out. Alan Graham was awarded “Gem of the Tweed” for his excellent “Queensland Maid” and Ray Muggeridge was voted the “Boatie’s Choice” for his David Payne designed “Jimmy Hall”. Both awards were well-deserved.

Unfortunately, on Sunday the forecast was not too good with 30-40 knot winds from the North and then the South. The wind was up early so most boats pulled out or had a lay-day in sheltered waters. It was a great weekend none-the-less, very well organized and a beautiful part of the country to go boating in.